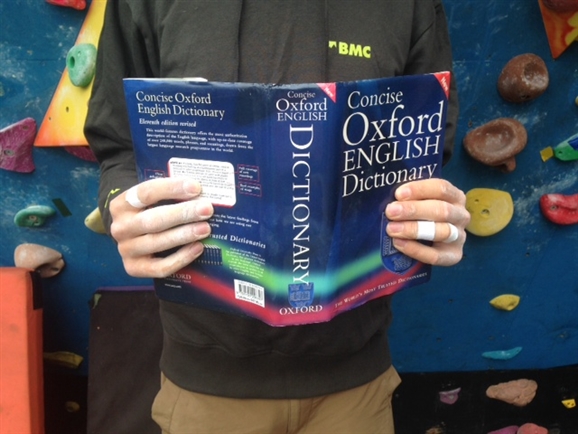 Allez: Go, Tight, Ganba (Japanese), Jiayou. Often used as a form of encouragement to the climber, especially at the crux of a route where the climax also builds up.

Barn Door: To swing sideways, usually occurring as a result of having only two points of contact on the wall, both on the same side of the climber’s center of gravity

Belay slave: Someone that volunteers for, or is tricked into, repeated belaying duties without partaking in any of the actual climbing.

Beta: Information about a climb; for example, what moves to make to reach a certain hold.

Beta flash: The clean ascent of a climb on the first attempt, having previously obtained beta or while having beta shouted up from the ground en route.

Campus: The act of climbing without using any feet.

Chicken Wing: This is a crack climbing technique. A hand is placed on one side of the crack and the shoulder on the other.

Chimney: Type of move using opposing forces of the hand and feet, usually within a wide vertical crack big enough for a climber to fit within and climb.

Crater: Hitting the ground at the end of a fall instead of being caught by the rope.

Crux: The most difficult move or sequence of moves on a climbing route.

Cut loose: Where a climber’s feet swing away from the rock on overhanging terrain, leaving the climber hanging only by their hands. Also known as “Cutting feet.

Dead Hang: Where a climber’s feet swing away from the rock on overhanging terrain, leaving the climber hanging only by their hands. Also known as “Cutting feet.

Deadpoint: A controlled dynamic motion in which the hold is grabbed with one hand at the apex of upward motion of the body, while one or both feet and the other hand maintain contact with the rock.

Drag: Friction resulting from the rope passing through multiple points of protection, especially if they are not within a straight line, or on a particular overhang route without an adequate length of quickdraws used.

Flag: Climbing technique where a leg is held in a position to maintain balance, rather than to support the weight. Often used to prevent barn-dooring.

Flash: To successfully and cleanly complete a climbing route on the first attempt after having received a beta of some form.

Groked: Accidentally going off-route while leading and becoming lost on a rock face in an area much more difficult than the climb being attempted. The word arises from the climb “Gronk” in Avon Gorge which is notorious for this.

Hang Dog: To rest on the rope as you lead climb, putting weight on the protection rather than the rock.

Match: To use one hold for two limbs.

On sight: To lead a climb on the first attempt without prior knowledge of the route or moves. Applies to difficult climbs.

Pinkpoint: A successful second, third, or twentieth attempt to climb the route from start to finish, without either falling or resting on the rope, will net you the pinkpoint! (differs from redpoint where you are required to place protection gear as you climb the route, eg. in a lead climb route)

Pogo: To use one’s one-leg swing to gain momentum in order to catch a far hold on the same side of the leg being used.

Project: A route or bouldering problem that an individual is repeatedly attempting to ascend over a period of time, but has not been successfully been sent by that climber. Sometimes slang in the form project.

Pumped: To be weakened or in pain (usually in the forearms) from a strenuous move or climb due to a build-up of lactic acid.

Red Point: To lead a climb without falling or putting weight on the rope, regardless of the number of attempts. Applies to difficult climbs.

Sewing Machine Legs: The involuntary vibration of one or both legs resulting from fatigue or panic. Also known as scissor leg, Elvis Presley syndrome, or disco knee. Can often be remedied by bringing the heel of the offending leg down, changing the muscles used to support the weight of the climber

Slack: When being used by a lead climber, often indicating to the belayer to provide less tension in the rope.

Smearing: To use friction on the sole of the climbing shoe, in the absence of any useful footholds.

Spotting: A method of protection commonly used during bouldering or before the leader has placed a piece of protection. The spotter stands beneath the climber, ready to absorb the energy of a fall and direct him away from any hazards.

Tight: When being used by a lead climber, often meant to signal to the belayer that he/she is tired/close to falling and wants the rope to be pulled taut by the belayer so that he/she does not fall. Can also be heard by spectators when encouraging climbers.